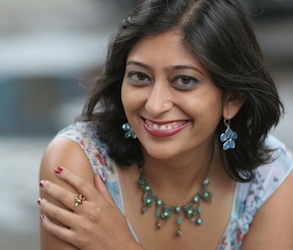 Purvi Shah’s debut book of poems, Terrain Tracks, explores migration as potential and loss. Published through New Rivers Press in 2006, the book won the Many Voices Project prize and was nominated for the Asian American Writers’ Workshop Members’ Choice Award in 2007. Shah, who holds an MA in American Literature from Rutgers University, is a former poetry […]

When dreams shower one part of the body, when reality claims the other

This next season drizzles like a dream. Time converts to a rubber chameleon, extending some hours, curtailing others. Throughout there will be a cloud of colors, a misty blurring of time and space such that it is hard to tell where one hue halts and another begins. And when I wake, from nights of fitful […]

Prospect Park Picnic, Summer 2001 For weeks now we have been hoping for heat, pleading the rains to cease. Summer is slow to arrive this year — we enter June caught within crisp wind and longing. Not that summer is like holding out for a greencard or love, but we have grown to expect summer, […]

Made in India, Immigrant Song #3

(a note from a New York City streetwalker) Some worker in the sweat of Madras, some former weaver from Kashmir, some hand in Ahmadabad’s dust, has been pounding iron again. The New York City streets swell with feet; multihued tracks glide over the flat steel disks which offer entry into the city’s interior lairs. The […]

Signs there is a hole in Manhattan

“What outlasts all this business and craziness is poetry.” —Sunita Mehta Die-hard New Yorkers gaze at the twin ends of the island and cannot determine which path leads downtown. The new city immigrants are white sheets garbed in Kodachrome and public telephone numbers. Call any day, any time. People are unequivocally welcoming – city strangers […]

“Asian women smell sweeter,” he says, deploying his small sample size to explain the phenomenon of insects tenderizing my flesh, carving red hills on a ruddy skin. The Georgia Boy seeks to conduct a personal evaluation, stretch his fingers across each dime-sized point of contact, institute a science out of the history of invasion. He […]

A companion to the body

“If your body freckles on the right side, then it is a sign of good luck,” my cousin remarks. My mother moves to check her face, but arrests her hand from motion, as if air were surrounding her wrist. Her face is free of the brooks of age, the contusions of careless play. It is […]

After our Brooklyn apartment building is broken into, 2x