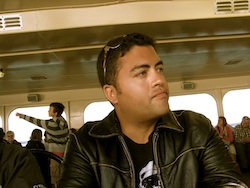 Shane Book’s debut collection, Ceiling of Sticks, won the Prairie Schooner Book Prize in Poetry, and was published in 2010 by the University of Nebraska Press. He has published more than 100 poems in two chapbooks, fifteen anthologies and over forty literary magazines in the U.S., U.K., and Canada. He was educated at New York University, the […]

On May 17, 2007, From the Fishouse and City Lights Books were pleased to present a reading by poets Barbara Jane Reyes, Matthew Shenoda, Camille T. Dungy, Maria Hummel, and Shane Book at City Lights in San Francisco. This is Book’s full reading.

A laborious wakefulness or was it a most unapologetic whistling in the ear (live, City Lights)

Shane Book reading A laborious wakefulness or was it a most unapologetic whistling in the ear, live at City Lights Books, May 17, 2007.

They Are Not Bits of Clockwork (live, City Lights)

Shane Book reading They Are Not Bits of Clockwork, live at City Lights Books, May 17, 2007.

The enormous head and huge bulbed knees, elongated hands and feet, don’t fit with the filed down chest, limbs of kindling, yet this is one whole boy, suspended in a cloth harness hooked to what looks like a clock stuck at three fifteen. Closer, you can see it is not a clock but a scale, […]