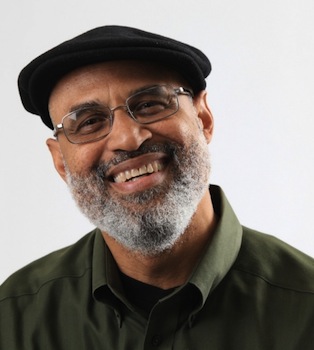 Tim Seibles was born in Philadelphia in 1955. He has published several collections of poetry, including Hurdy-Gurdy (1992), Hammerlock (1999), Buffalo Head Solos (2008), each from Cleveland State University Poetry Center Press; and Fast Animal (Etruscan Press, 2012), a finalist for the National Book Award. His work has recently been featured in anthologies such as Black Nature, Seriously Funny, and So Much Things to Say. His […]

Say, good lookin, what brings you out thisaway amongst the fanged and the fluffy? Grandma, huh? Some ol bag too lazy to pick up a pot, too feeble to flip a flapjack— and you all dolled up like a fire engine to cruise these woods? This was your mother’s idea? She been livin in a […]

Natasha in a Mellow Mood

(apologies to Bullwinkle and Rocky) Boris, Dahlink, look at my legs, long as a lonely evening in Leningrad, how they open the air when I walk, the way moonlight opens the dark. Boris, my hair is so black with espionage, so cool and quiet with all those secrets so well kept—those secret plans you’ve nearly […]

for Lips Her mouth fell into my mouth like a summer snow, like a 5th season, like a fresh Eden, like Eden when Eve made God whimper with the liquid tilt of her hips— her kiss hurt like that— I mean, it was as if she’d mixed the sweat of an angel with the taste […]

Our moms got us together at Woolworth’s, remember? Cheeseburgers. Summertime. 1967: Twelve years in the world, mostly we burned for football, to get it and move, to shake anybody that wanted to bring us down: six points was all we needed and time to find the future where we’d be bad-ass superstars. We thought it […]

It seems insane now, but she’d be standing soaked in school day morning light, her loose-leaf notebook, flickering at the bus stop, and we almost trembled at the thought of her mouth filled for a moment with both of our short names. I don’t know what we saw when we saw her face, but at […]

Bonobo apes employ sex—all kinds—as their primary mode of social interaction. Violence is essentially unheard of among them. Call Drea and Carlo Jareeta, Josefina and George. Ring Zhao, then Yusef Dvora, Savannah and Dee. Let’s not be so useless today. Let’s find a field and, Andre, bring some birds—a thousand sparrows to pepper the sky, […]