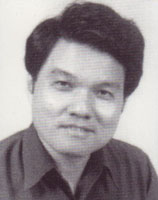 Wind Lynn is the pen name of Taiwanese poet Nicholas Lin. He has studied traditional Chinese poems since childhood, and began to write Chinese modern style poems 10 years ago. A selection of his short poems was published in Hong Kong in 2004. A graduate of Michigan State University, he has taught Chinese language and […]

Startled by Summer in the original Chinese The klaxon warns of the first typhoon, and I think how last night’s booming thunder was already too late for spring. The fog outside the shutter no longer hurries us into jackets and we suddenly discover it’s ok to go out in short sleeves. However, the one thing […]

Startled by Summer (in the original Chinese)

Chun Jiang (Spring River) in the original Chinese The river banks are turned to parks "for the ducks' convenience." The park grows wider every day while the river always narrows. As the tourists increase the ducks diminish. These ducks aren't prophets, and might not sense the warming water. A river’s pollution still kills them with […]

A Group of Poems on Environmental Protection

A Group of Poems on Environmental Protection in the original Chinese They Greened the Metropolis They suddenly greened this grey city, but why isn’t anyone out pruning it? Aha! It’s all Astroturf. Inclining Together Towards Death We call the industrialized Yellow Sea the Red Sea, and the industrialized Red Sea the Black Sea. In the […]

A Group of Poems on Environmental Protection (in the original Chinese)

The Poetic Route in the original Chinese Routes are where we walk about And poems are what we have thought out Now What of the poetic route? My parents taught me ‘walk the way ahead’ Teachers lit lamps along the scholars’ road Friends lured me toward paths of riches instead And others would steer me […]