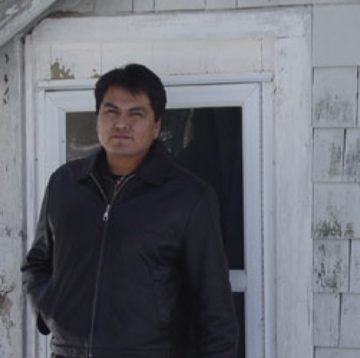 Sherwin Bitsui is originally from White Cone, Arizona, on the Navajo Reservation. He is Navajo of the Todich’ii’nii (Bitter Water Clan), born for the Tl’izilani (Many Goats Clan). Currently, he lives in Tucson, Arizona. His first collection of poems, Shapeshift, was published in 2003 by the University of Arizona Press, and his second collection, a book-length poem entitled Flood Song, was published by Copper Canyon Press in October 2009. He holds an AFA from the Institute of American Indian Arts Creative Writing Program and is completed his studies at the University of Arizona. He also works for literacy programs that bring poets and writers into public schools where there are Native American student populations. He is the recipient of the 2000-01 Individual Poet Grant from the Witter Bynner Foundation for Poetry, the 1999 Truman Capote Creative Writing Fellowship, the 2002 University of Arizona Academy of American Poets Student Poetry Award, a Lannan Foundation Literary Residency Fellowship, and a 2006 Whiting Writers’ Award. Bitsui has published poems in American Poets, The Iowa Review, Frank (Paris), Red Ink, and elsewhere. His poems were also anthologized in Legitimate Dangers: American Poets of the New Century (Sarabande Books, 2006), and in From the Fishouse: An Anthology of Poems that Sing, Rhyme, Resound, Syncopate, Alliterate, and Just Plain Sound Great (Persea Books, 2009).