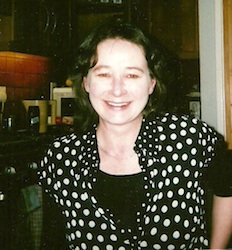 Liz O’Donoghue’s publications include Train To Gorey (Arlen House, 2009); Waitress at the Banquet (Killeen Books, 1998); and The Towers Turn Red (Southword Editions, 2005), a translation of the Lithuanian poet Sigitas Parulskis. In 2011, she read at the Shanghai Literary Festival and with Brian Turner in Cork, Ireland, where she lives. Her film anthology of Cork poets, In the Hands of Erato, was screened […]

There may as well be a galaxy between us you on some remote star and me adrift. Solitary contemplating a screen through swirls of cosmic dust until my eyes water. I follow the beam between moons nausea’s got my appetite weightlessness makes me wane. Splendid visions of your mountainous landscape flash intermittently until I am […]

I Abandoned in Malaga for the Sierra Nevada Murphy went on towards the roof of Spain… by the fountain in Plaza de la Constitucion solo…suddenly in a flurry of diamonte fairly bellowing a matador of incredible beauty reined his white stallion and blew a mantilla of a tear from my eye. II I am on […]

Dear V Returned ravenous … an avocado had baked all week in the fridge. In the dark, on the patio, with my nine shrubs looking on, I ate it sweetened with vinegar. I could smell the fuschia and the soft white flesh of the fruit, remembered the same red purple of it, the same deep […]

after all day in Krugers The brimming ocean the silver sea a dark man lying on the horizon a white woman on his thigh a beautiful white skinned woman. Looking south towards Iveragh the seer beside me mapped those nights of ecstasy by the stars ‘the sea their silken sheet a soft climax at the […]

My sins are huge toothed ones committed from spire to spire from Pine Street to Cathedral Row roaring love between the domes and crosses clawing at a metal door. My wails are whipped by an ill-natured wind through the gutters of the soul and I mewl like a poet ignored. What have I learned? I […]

Through the coolness of the stone corridor reading ogham into our trite conversation into the quad and sunshine and bodies making ogham lines along the path until our conversation turns to stone. Making a meal of dining out with you flashing your plastic in my face and stammering in my ear – how could you […]