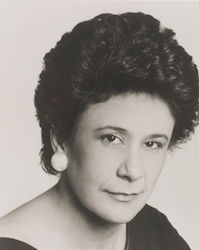 Estha Weiner is co-editor and contributor to Blues For Bill: A Tribute To William Matthews (Akron Poetry Series, 2005 ), and author ofThe Mistress Manuscript (Book Works, 2009), and Transfiguration Begins At Home (Tiger Bark Press, 2009). In the Weather of the World is forthcoming from Ireland’s Salmon Poetry in 2011. Her poems have appeared in numerous anthologies and magazines, including The New Republic and Barrow Street. […]

Nothing if not complex, this Electra, but whose? Sophocles’? Euripedes’? O’Neill’s? Giraudoux’s? or the daughter of a wise and gentle merchant who told his child when she was twelve, with hair as black as mourning, “I know you love me, but you really must find someone else.”

On the ‘Island of the Old Women,’

in the middle of Loch Lomond, I wander Inchailloch Burial Ground, on vacation from the year of the dead. Whoever cared has placed a wooden bench for the visitor to sit amongst the gravestones, one from Clan MacGregor, “family” of Rob Roy, “Celebrated Highland Rogue,” another educated pirate. Some gravestones offer symbols which do honor […]

In appreciation of Frank O’Hara I was watching the hurricane news thinking it’s bad but it’s not as bad as they thought when all of a sudden it was worse why?? the levees broke and the water poured through the sexy sweet City of New Orleans through cemeteries and jazz Zydeco and oysters booze and […]

Because the white narcissus

bloomed indoors in February, grew slim and sinewy, leaned into the light like a bom actress, the light’s efforts to penetrate the blur and murk of the window became as significant as the burgeoning of the bulbs that rested on the bed of stones.